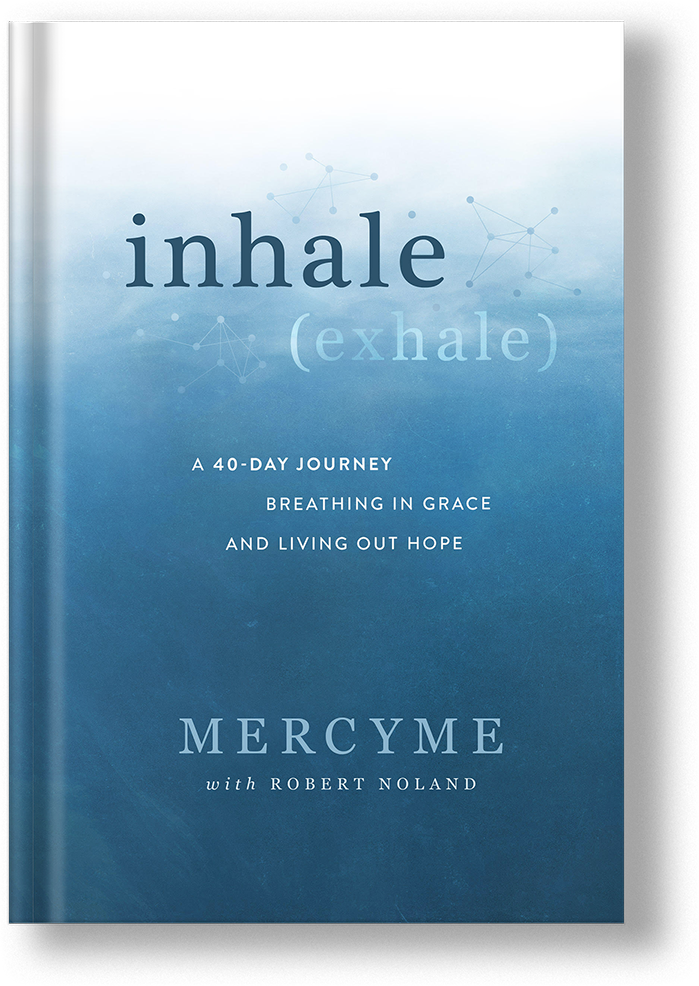 Place your order as soon as possible to ensure timely delivery – we are experiencing longer than normal shipping times due to unprecedented transportation delays. Usually ships within 72 hours of order - Physical book ordering available through USA only.

inhale (exhale): A 40-Day Journey Breathing in Grace and Living Out Hope

A 40-day devotional experience inspired by MercyMe’s best-selling album, inhale (exhale) follows the 16-track record to create a path for readers to breathe in and absorb God’s grace in their lives.

The heart of this devotional is found in two days of entries, an “inhale” day and an “exhale” day, designed to coincide with each song as readers work their way through the album and devotional. Each entry ties to a particular song and couples those thoughts and lyrics with scripture passages, application questions, meditative verses, prayers, and space to journal. These entries are:

Marking the twentieth anniversary of the band, after being named Billboard’s Top Christian Artist of the Decade from 2010-2020, coupled with the breakout success of the 2018 film I Can Only Imagine, songwriter and lead singer Bart Millard said, “Going to these dark places that you have to go to write, I didn’t know how to make music that wasn’t connected to something painful, especially when I associated that with the songs that mean the most to me. It’s been hard to go to that place, but I love the results when I do. For the first time, with inhale (exhale) it was more about other people’s stories than mine. I was writing out of something that I witnessed more than I experienced myself.”

This devotional helps readers to reflect on themes like:

Readers will be challenged and encouraged on this 40-day journey with MercyMe as they meet with God, accepting His invitation to breathe in grace and live out hope.

MercyMe is a multi-platinum selling contemporary Christian band, with numerous GRAMMY nominations, American Music Awards, a Billboard Music Award, multiple GMA Dove Awards and K-LOVE Fan Awards, and over 9 million albums sold worldwide. Their landmark song “I Can Only Imagine” written by lead singer Bart Millard after losing his father to cancer, was the first digital single in Christian music history to be certified platinum, and now 4x platinum. The song led to a breakout feature film and Millard's best-selling book by the same name.

In 2009, Billboard named MercyMe's Word Of God Speak the No. 1 Song of the Decade and the group the No. 1 Artist of the Decade in both the Christian Songs and Christian AC Songs categories. The group has sold out venues throughout the US and Canada, including Radio City Music Hall and Red Rocks Amphitheater. MercyMe's 2017 album, Lifer, went No. 1 on Christian Soundscan and No. 10 on the Billboard Top 200 overall chart during its first week.

Originally formed in 1994 in Greenville, Texas, the beloved band's storied career speaks to the endurance of the members and the timelessness of their music. inhale (exhale) is MercyMe's first book as a band.

Robert Noland spent ten years as a touring musician, songwriter, and producer in Christian music and then twenty years running a para-church ministry where he first began writing Christian resources. Since 2014, he has become an author, writer, and creative consultant based outside of Franklin, Tennessee. Robert worked with Bart Millard on his best-selling memoir, I Can Only Imagine. To learn more about Robert's work, visit RobertNoland.com.