They might command large stages every night when they’re on the road, but when they’re home, many of your favorite Christian artists are on “dad duty” — changing diapers, reading bedtime stories and rocking their angels to sleep. Some days, Christian artists are packing lunches and doing interviews in the school drop-off line. Other days, they’re juggling multiple kids on a tour bus. Regardless, in the world of fatherhood, there are no days off.

In honor of Father’s Day, we’ve assembled a list of dads who find themselves in various seasons of parenthood. From first-time fathers to veteran parents, they all have one thing in common: Being called “Dad” is music to their ears.

There are far too many dads in Christian music to include them all on one list, but here’s a small sampling of 10 fathers representing all of the artists out there, striving to raise kind children who grow up to honor and serve the Lord. Behind the scenes, these men are doing the good, hard work of faithfully leading their families and loving their kids. Happy Father’s Day to all the dads at home, on tour and in the studio!

Sibling trio @CAIN officially welcomed the first grandchild into the family in March when Logan Cain, and his wife, Emily, introduced River James. In the first two months of her life, their daughter visited five states, courtesy of her daddy’s busy itinerary, which includes a tour with Casting Crowns in the fall. Already a pro at traveling, River James will soon be joined by two cousins when Logan’s sisters and bandmates, Madison and Taylor, deliver their first babies later this summer. The newest additions to the Cain clan are expected to make their arrival in August within a few weeks of one another.

@Andrew Ripp and his wife, Carly, waited five excruciating years to become parents. After a long struggle with infertility, the couple adopted their beautiful baby girl, Frances. The “Fill My Cup” singer affectionately refers to the now three-year-old as “the Queen.” While their family expanded in a way he didn’t expect, Ripp admits fatherhood is better than he could have ever dreamed. These days, when he’s not adventuring with Frances, the young dad’s working on a new record.

Singer, songwriter and worship leader @Jon Reddick says, “I’ve got the best kids in the whole wide world. You’ll never be able to convince me otherwise. I’m grateful to God for my kiddos.” His two oldest were born on the same day, two years apart. The father of three was recently nominated for his very first K-LOVE Fan Award thanks to the incredible impact of his powerful song, “God, Turn It Around.”

Many of @Jordan St. Cyr's songs are the result of caring for his daughter, Emery, who suffers from a chronic illness. Regularly in and out of the hospital, his youngest child has forced the father of four to live out the messages of his hit songs, like “Fires” and “Weary Traveler.” The Canadian-born singer, who recently relocated his family to Nashville, intends to continue writing songs inspired by real life and the resilience of his little girl.

Award-winning artist @Brandon Heath is the father of two young daughters, Palmer and Elliston. The birth of his first child was especially bittersweet, as his own dad passed away shortly before she was born. Married to his wife, Siebe, for eight years, the “See Me Through It” singer admits he loves being a girl dad. “I still feel this newfound honor of being celebrated on Father’s Day,” he shares. “Two little girls call me Dad, and I’m overwhelmed by that.”

Two of Ed Cash’s four children are in a band with him called @We The Kingdom. Sharing the stage with daughter Franni and son Martin is the answer to Cash’s longtime aspiration of being a touring musician — a dream he laid down decades ago to write and produce music for artists like @Chris Tomlin, @Crowder and @NEEDTOBREATHE, among many others. We The Kingdom also features his brother, Scott — a father to five daughters — and family friend Andrew Bergthold.

Solo artist and member of @Maverick City Music @Brandon Lake is the dad of two rambunctious boys, Blaise and Beau, whose sweet voices can be heard on his House of Miracles album. In addition, his sons inspired several songs on his EP, Almond Eyes, a gift to his wife, Brittany, for their tenth wedding anniversary. The couple is set to welcome a third baby boy in August.

Jolie made @Jordan Feliz a dad, and a few years later, Judah made him a father of two. The Feliz kids love getting ice cream when their dad, and the “Jesus Is Coming Back” singer dotes on their every move. “The only prayer I have for my kiddos is that they grow up to know the Lord, to love the Lord and to serve the Lord,” he says.

When Evie Joy was born in early 2021, @for KING & COUNTRY’s Luke Smallbone became the father of a daughter for the very first time. The baby of the family, Evie follows big brothers Jude, Phoenix and Leo. Many of for KING & COUNTRY’s songs have been inspired by Luke’s children, including “Cheering You On” from the duo’s latest album, What Are We Waiting For?, and the precocious Leo often makes a cameo on the band’s Insta Stories.

On April 13, 2022, Maverick City Music’s @Chandler David Moore and his wife, Hannah, welcomed a daughter, Krue Grace. “I’m obsessed with her. I’ll try words later,” the proud dad wrote on Instagram, announcing her birth. Moore also has two sons: Chandler II (“Deuce”), 4; and River, 2. The Moore kids are frequently out on the road with their dad on the “Kingdom Tour,” Maverick City Music’s summer trek with @Kirk Franklin, currently hitting cities across the U.S. through July. 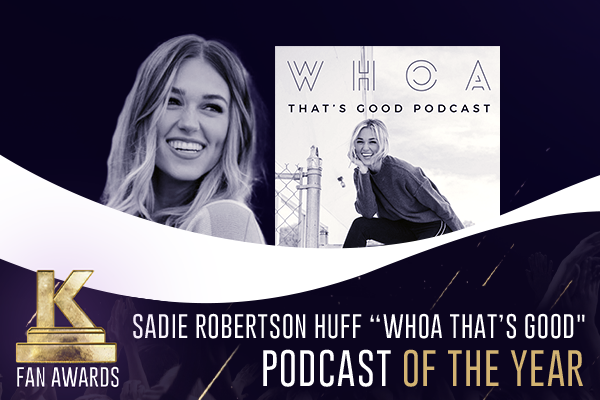